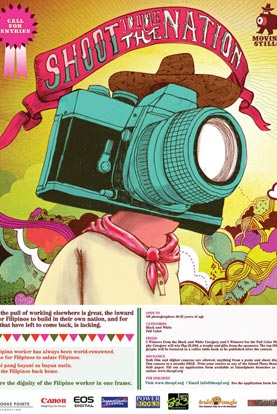 The battle cry: Liyab Pilipinas. Reigniting passion for the nation.

For its pilot project, Outlooke Pointe Foundation (OPF) highlighted the use of photography as an instrument of empowerment. Shoot to Move the Nation: Dignity of the Filipino Worker photography contest was launched on December 2008. The contest revolved around one underlying premise: the greatness of the Filipino worker. Winning photos were exhibited and showcased in a coffee table book illustrated and designed by Ideals Creatives Inc.

Shoot to Move the Nation: The Dignity of the Filipino Worker coffee table book was launched in cooperation with the Department of Labor and Employment (DOLE) during the May 1, 2010 Labor Day Fair at the SMX Convention Center, Pasay City. This project was also supported by Fruit magic and Island Photo.

Back to Projects »
Scroll to Top